Picking up where we left off

In my previous blog post, I examined the bare bones of the Golden Cross to see if it held up as a profitable trading strategy. Long story short - absolutely not! However, it wouldn't have such an illustrious and ostentatious name if there wasn't some wisdom in its rules.

To review, the Golden Cross says to trade according to the following rules:

At the very end of the post, I suggested the Golden Cross may be a good starting point, and not the end-all solution for a profitable trading strategy. I had some ideas about what might improve the strategy, so let's see what works!

One of the biggest failures of the plain Golden Cross strategy is no safeguards against purchasing flat-out risky stocks.

You might remember from the previous post that the Golden Cross could be supported by high trading volumes. This makes sense because higher volume means there is more immediate momentum that's pushing the stock price higher, implying the 50-day crossing the 200-day average is not being caused by the background noise in all stock price movement.

Next, let's try to be smarter about selling. When the 50-day crosses below the 200-day average, also known as the Death Cross, the actual price of the stock has probably already sunk much lower.

I used the sort rule sma(50,1) - sma(200,1) with purchase larger first in the original Golden Cross example, and I will continue to use it here. This prefers stocks that have a wider crossover, which means it is showing a stronger Golden Cross pattern. 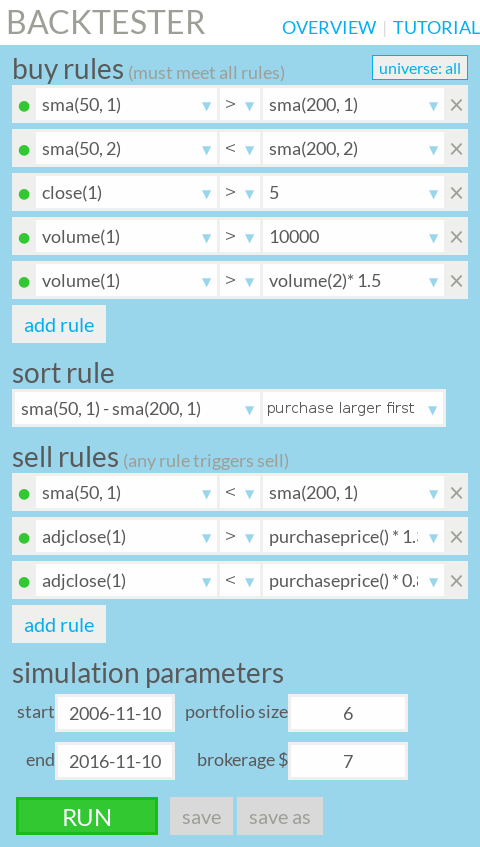 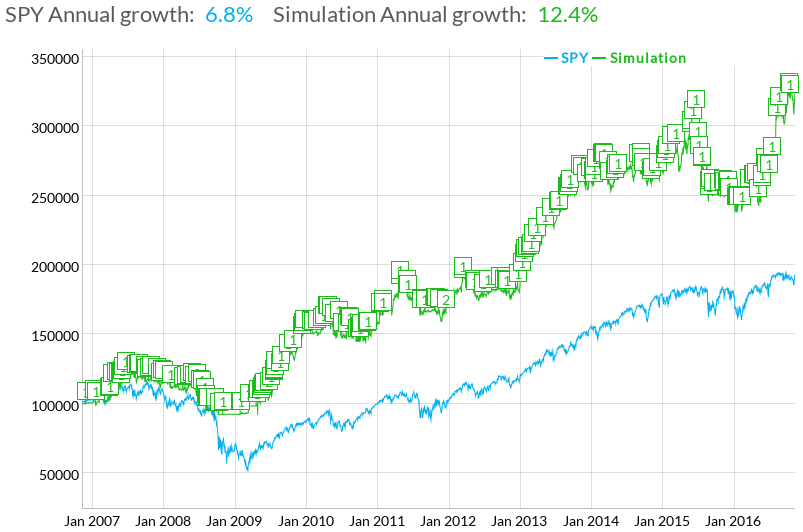 Yes! We've completely turned the Golden Cross around! With a few more rules, we were able to turn a sorely losing strategy into a pretty darn good one. We beat the market handily, and missed the worst of the 2008 downturn.

When I see results like this, I can't help but think about other ways I could tweak the strategy to make it even more resilient and profitable. After all, this article examined only one of the ideas I had for improving the Golden Cross in my previous blog post. I'm still eager to pair it with fundamental analysis techniques so I can hopefully avoid the drawdown this strategy experienced in 2015.

Still, the biggest take-away for me is that we can start with an age-old strategy that may have lost its luster, and quickly turn it back into a profitable strategy tuned for modern markets. All we needed to do is ask the question, and then start testing!

An Objective Look at the Golden Cross New Use for an Old Ratio Flawed Stock Trading Strategy from the 80s Can Steadily Increasing Revenue Lead to Stock Price Appreciation? Advanced Options in Backtester

An Objective Look at the Golden Cross

The simplest form of Technical Analysis The Golden Cross is a simple trading strategy based on technical analysis. It…

Let me show you something incredible. I ran a backtest that started on November 12th, 2013, and ran it…