This has been a feature we have wanted for a long time, and our customers have been requesting it too. You can now run Screens, run Backtests, and set up Watchlists to only look for companies based in the United States!

Take another look inside Universe

Here's where you'll find the new feature on Screener, but it's the same in any tool. Since this feature controls which stocks the tool will use, it's found inside the "universe" menu in the top-right corner of the blue box.

Click universe: all and then find the US only option just above the Sector selection menu. 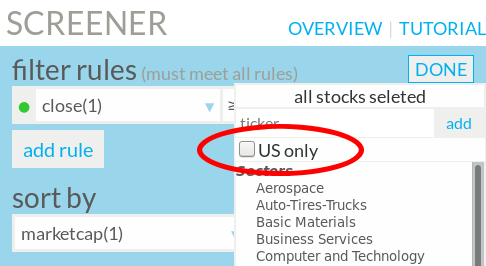 By default the box is unchecked to select all stocks in the Genovest Universe. Check the box, and you're all set! The tool will now only use stocks based in the US.

You can use this new feature with the existing Universe selections too. Pick Sectors, Industries, and individual tickers just like before, and if you have "US only" turned on, it will filter those selections to just US based companies.

This feature is also time-sensitive. Take Medtronic, for example. At the beginning of 2015, it was still filing as a US based company and if you were to run Screens during that time with "US only" turned on, you'd see Medtronic show up. Change the Screen date to late 2015, and you'll see Medtronic no longer appears, since it officially became an Ireland-based company following its acquisition of Covidien.

In Backtester, the simulation will only buy companies that are currently US-based. If they happen to switch to another country, the Backtester will not automatically sell, but the company will no longer be considered for re-purchase later in the simulation.

How We're Using It

As I mentioned earlier, not only were our customers asking for this feature, but we desperately wanted it for ourselves too! Genovest was made out of a personal desire for these types of tools, after all.

One of the first things we're excited to start experimenting with is emulating benchmark indices like the Dow Jones Industrial Average, which tend to choose exclusively American companies.

Recently we also started sharing our best Strategies with our users. While developing these, we take a look at the trades each strategy makes through time in the Backtester, and ask ourselves if we really would have made that trade at that time. Whether the company is American or not is something we heavily consider in that analysis.

For example, if we see the strategy buying a lot of South American banks, we're probably not actually going to invest in those stocks if an alert to buy came up in Watchlist. Watchlist is indeed meant to be used in this way - with human safety checks - but it does mean you're deviating from the strategy you vetted in the Backtester. Being able to pre-select American companies from the get-go greatly improves the reliability of the strategy you're developing, if that's the type of investor you want to be. Just because a company isn't American doesn't mean it's inherently more or less risky though. Again, consider Medtronic. They're still strong and healthy, and if anything, the move to Ireland only helped their position.

Advanced Options in Backtester A Large Batch of New Technical Indicators Research and Development Expenses are here! New Use for an Old Ratio Can Steadily Increasing Revenue Lead to Stock Price Appreciation?

A Small Feature with Big Impact

Genovest has a new feature! It looks small on each of the tools, but it's exceptionally useful for taking…

Research and Development Expenses are here!

The newest addition to our collection of data is Research and Development Expenses (R&D), which we've included…